Your MOPA amplifier is a powerful RF instrument with a significant output power. In order to minimize the possibility of RF energy from the Plasma Tube wires feeding back into the machine and causing issues, we have prepared the following tips and images to help you understand how and where to connect your machines for the best possible operation.
Power Cords- Both of the GB-4000 power cords should be wrapped as small and neat as possible to avoid long wires acting like antennas and picking up energy from the MOPA and Plasma Tube.

The photo below shows what happens when you hold a CFL compact florescent light close to the Positive output wire on the MOPA Amplifier. That energy is not a problem as long as it is properly routed and doesn't have a chance to feed back into your GB4000. 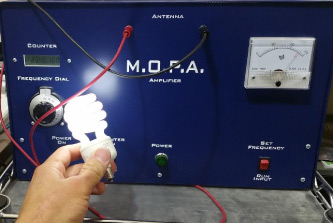 Placing the GB-4000 close to the side of the MOPA can cause RF interference. 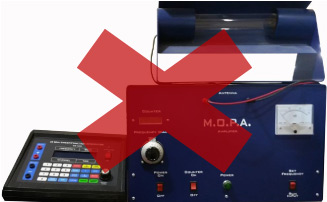 A better choice when setting up your GB4000 and MOPA would be to put the MOPA and GB4000 on a separate shelf. The ideal placement is with the MOPA on an upper shelf, and the GB4000 on a lower shelf.

Additional Steps for minimizing RF Interference with your M.O.P.A and GB-4000

Step 1. If you cannot stack on a shelf as shown above, try the following. Do not allow your Plasma Tube power cords to be within one foot of your GB-4000. This alignment can cause cross talk to the GB-4000 key pad or the LCD Screen. 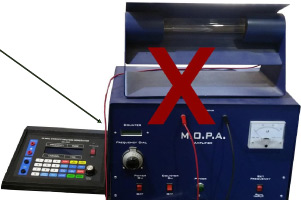 Instead route the Plasma Tube wires away from the GB-4000 as shown below. 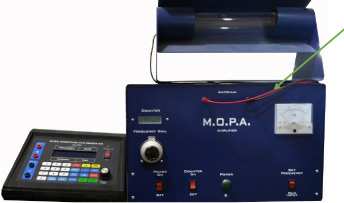 Step 2. Do not allow the Plasma Tube wires to be within one foot of the BNC Cable or power cord on the back of the instruments. This can cause RF energy to feed back to the GB-4000 and cause the GB-4000 RF light to come on or kick out a power supply.

Step 4. Notice in the photo below how the M.O.P.A. Plasma Tube is running parallel (at the same angle) to the BNC cable, which can cause the RF feedback we have been discussing. 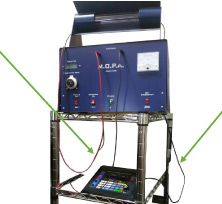 To fix this issue, move the Plasma Tube wires so that they are not running parallel to the BNC cable or power cables. 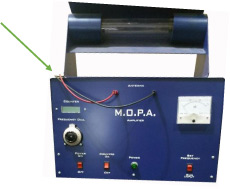 Here is an example of RF interference from a customer as seen in the photos below.
Notice that on the front of the cart (left side of the image), the Plasma Tube wires are hanging straight down. At the back of the cart (right side of the image), the GB4000 power cords are also hanging straight down, which means that Plasma Tube wires and power wires are running parallel for a significant distance.
Also Notice that the GB-4000 is sitting directly next to the Plasma Tube which makes RF feed back and interference in the GB-4000 keypad or LCD display much more likely 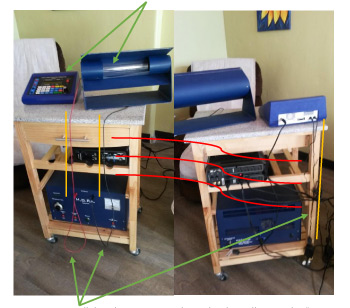 To solve this problem, the user would separate the GB4000 from the Plasma Tube and change the positions of the GB-4000 power cords so that they are not running parallel to the Plasma Tube wires.